For this partial disclosure, the cabal planned to reveal the truth about the ancient builder race, 9/11, and the crimes of the Bush administration. Along with this, they planned to give out more funny money as a bribe. This money would not be much different than what we have now.  It would still be based upon "Babylonian, money magic". In exchange for all of this, they would still get their New World Order, and most likely get another century to try and wipe out three quarters of the population.  As Wilcock stated (and I would have to agree), it would not be a good idea to accept gifts/bribes from such people.

This cabal has been working on the partial disclosure since the 80's. (They may have to change this plan though, as Wilcock disclosed the plan at the CLE in such a big way.  This may be a good thing.)

So we know general information about this partial disclosure.  Lets see what it truly looks like. 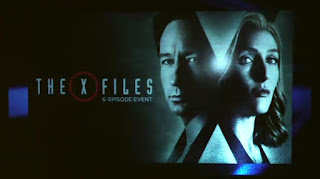 The X-Files reboot aired after 14 years of absolutely no word from this title. It seems out of place.

If you haven't already noticed, this poster is more than it appears to be.  It serves as a prime example of Illuminati tactics.

The Illuminati give you clues of their true identity.  This is because, according to their religion, if you don't see their clues, this equates to consent, and they can proceed with whatever plan they are telegraphing.  It's as though they rub the truth in your face, but at the same time, they don't want you to see it.

As David said, the first and second episodes of this X-Files reboot are most relevant. It's basically a documentary/data download. They go over chem-trails, the banks, UFO's, martial law, NWO and more. As the show exemplifies, part of the partial disclosure narrative is that there are no extra terrestrials. They cover the subject in the beginning, but instead of coming out with this, they replace it with the idea that they spliced human children with alien DNA, and that all of the 'greys' that we see are actually human children.  The cabal is trying to sell us this partial disclosure so that they can maintain control.

On the surface there is this message of partial disclosure, but underneath, the message is much different.

Lets look at the image. 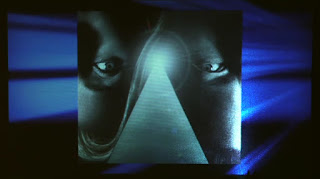 When we flip this image, we get closer to the truth behind this reboot.  Of course we see the Illuminati trademark (the all-seeing eye). Notice both eyes are looking at the pyramidal eye. This is their way of telling you that this is their platform and that they are the ones speaking.

This is not accidental.  The Illuminati practices black magic, and believe that they have to show their face in whatever they do.

This is their version of a cosmic free-will principle. 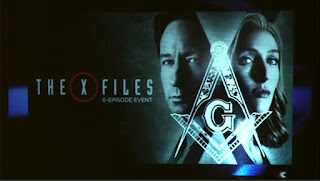 Here is an overlay of the poster and Masonic symbol. These two images line up perfectly. There was absolutely no photo-manipulation required.  Their chins are lined up perfectly with the Masonic square.  The slopes of their collars are exactly in line with the Masonic compass.  The representative "eye" at the top of the upside-down pyramid lines up with the compass hinge.  The lower pyramid has a black triangle counterpart which points to the G. (The G means "god", which is actually their god, Lucifer.)

They deliberately designed the poster around the Masonic square and compass.

This is the Illuminati version of a spell.  This is them telling us that it's a spell. They want to introduce these ideas so that people don't notice.  They think that if people are too dull to see them, then they deserve to be enslaved, but if we see what they are doing, they can't proceed.

It must be our decision to see. 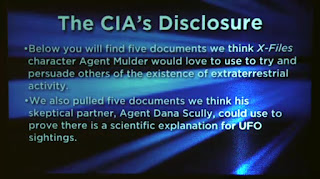 According to Pentagon sources,:
“Rupert Murdoch’s Fox Network has been ordered to reboot the x-files program to reveal truth in plain sight about alien technology, free energy, anti-gravity, 911, NSA, depopulation etc.” Agency sources say “Bush cancelled the show in 2002 to prevent it from exposing 911.” Meanwhile, the CIA has declassified its UFO files.

- Homepage For the Navajo Indigenous Tribe.

- 2JAN Lee Spiegel, HuffingtonPost.com : 'X-Files' Creator: 'I Thought The FBI Was Going To Shut Me Down’.

- Homepage for the Citizen Hearings on Disclosure from 2013.